Some thoughts on past purchases

About 10 years ago, I spent some time buying up models on eBay - Deloreans, Batmobiles and Alien-related plastic, resin and vinyl. There were some kits that were in mint condition; some kits that had been started, but not progressed very far, and some kits that just needed stripping back, starting again and rescuing.

Suffice it to say, I quickly got bored of the rescue kits. I had plans, yes, but lacked the motivation to get them underway. There's a Powerloader kit from Halcyon with a Ripley figure - the kit needs wiring up for lights, and the head of the figure needs resculpting to look like a human female, let alone like Sigourney Weaver. I started the sculpt, and gave up within a day (not really a sculpter). I've since passed it on to a colleague, who apparently has done a good looking job on it, but I haven't seen it yet. And then the whole thing needs painting and battle-damaging. Maybe once day I'll tackle it.

Then there's this curio: The Halcyon kit of the Sulaco. In the film, the Sulaco flew the crew to orbit the infested planet, and then made it to the third film with a different paint job.

I bought the kit fully assembled - it was a beginners' attempt, unfortunately - the pieces weren't aligned well, and the sprue joints hadn't been cleaned off and sanded flush. The kit was in bare plastic, and the mini dropship model was missing, too.
Still, I bought it - about a fiver, I seem to remember, with the plan that I'd clean it up and paint it.
Nearly ten years later, and it's still in the garage.

Point? Life's too short. Either fix it or bin it. It's not worth anything otherwise.

So I started to fix it. Except that I couldn't remedy certain mistakes - the glue was too hard, the plastic too flimsy. And then I just wanted to paint it. So I did. 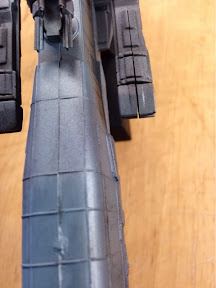 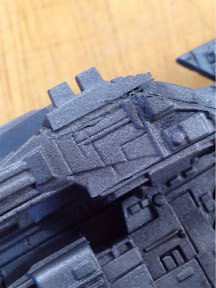 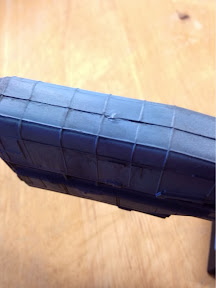 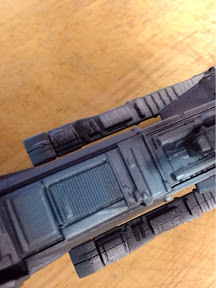 The airbrushing took about an hour and a half in total (after priming). If I had this kit from fresh, it would be a quick 2-day build 'n' paint. The mould lines would come away before any glue was uncorked, and the typical 90s asymmetry of warped injection-moulded plastic would be rectified with hot water and rubber bands. Simples.

The only reason I bought this model was because the mint kits are hen's-teeth rare. For now, though, I've enjoyed a decent paint-up practice for the next big thing. Decals today, and then seal it.

Maybe I'll think twice about buying kits to rescue in the future - for spares, yes. To restore? Hmmm.