The slowest year in living memory

I'd like to think that I'm nearing completion on this Gremlin project. I haven't taken on any other commissions since starting it, and I've been really feeling the project fatigue.
Not that I've been working on it 24/7 for any of it. The beginning was, as always, exciting, daunting and full steam ahead. New tools, new methods of accomplishing difficult tasks, and then a whole load of unforeseen events reared their ugly heads and hindered progress.

I’ve learned about mixing expanding foam; about large wire skeleton structures; about not taking on a giant project when you’ve just moved house.
I think maybe that’s been the biggest issue - there hasn’t been the space to work properly. My workbench has often been ‘wherever I lay my brush’, but when you’re dealing with a 28” tall gargoyle, yout can’t easily stash him on the shelf while you set the table for dinner.
The house move has had added timesinks - laying new floors (I’m pleased to have learned to fit carpet and lay wood-laminate floors), building a workshop/shed/studio (I learned some intermediate electrical skills, as well as ‘simple’ construction work), and we added a dog to the family, which might be a blessing or a curse - a year on, I’m not convinced either way. Incidentally, a massive project for next year is to sort the landscaping in the garden that the dog has helped reshape. The Gremlin, too had a few accidents: a couple of nasty falls, which broke strong joints, and ripped the internal foam holding it together.
I’m basically a Gremlin surgeon now.
There have been personal ups and downs too - family bereavement, redundancy, marriage wibbles, mental health issues - but with 2017 about to close, I think I’m back on track. And I don’t want to out too much importance on the Gremlin, but if I can deliver it to the client before Christmas, then I can start 2018 afresh - no baggage (well, less baggage)
Things I’m looking forward to? I’m in the final stages of setting up a Patreon page, and planning new content for my sleepy YouTube channel. The shed/studio is up and running, so I’m keen to share project builds with the world. I may stick to smaller, more easily attainable subjects, though - perhaps the 1:1 Brontosaurus will stay in its box for a little while
longer. 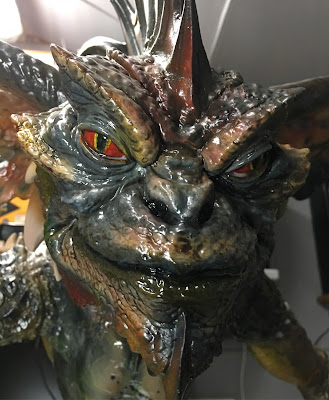 Posted by MiniPainter at 04:00 No comments: