I've been a fan of the Alien series of films since I was a teen. The Beatties chain of model shops used to stock the best array of model kits, from standard 1:72 Airfix planes to what I considered to be the most exciting kits - sci-fi tie ins. They had AMT Star Trek kits and the Halcyon Movie Classics range - these were catnip for me. I went in every Saturday just to look at them. I saved up and bought a Back to the Future DeLorean kit. I wanted the Alien kits, but they were expensive, and the vinyl Face Hugger and Chest Burster kits were ridiculously pricey (£90 in 1992/3 wasn't even Christmas-present territory)

The USS Sulaco was the Colonial Marines' ship in James Cameron's 1986 sequel, Aliens. It transported its crew to LV-426, to make contact with a blacked-out colony of terraformers. It was also seen in Alien3, as it drifted towards the Fiorina prison planet.

As I've mentioned recently, this model is one I picked up on eBay about 10 years ago to repair and paint. It wasn't boxed, and was missing the tiny Drop Ship, but it had the instructions and the original decal sheet. Should have been a breeze to fix. 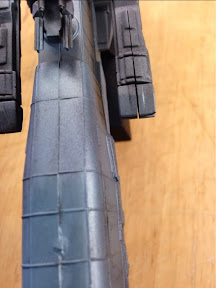 It's a well-known kit for being poorly moulded. Pin holes and ill-fitting parts are just the beginning. I've seen modellers super-detail this kit with Plasticard panels and textures, to give a better sense of scale once they've force-fitted the edges. I've even read complaints that it's the wrong size; that it's too short for the usually included Drop Ship. Rivet-counters be damned, I thought - I'll finish this as if straight from the box.

However, it was poorly built, held together with the strongest glue, meaning I couldn't prize it apart without destroying it. I made a half-hearted attempt to clean up some of the sprue flash (see above pic for the extent of plastic faux-pas), but decided that a painting exercise would be the best use for it. 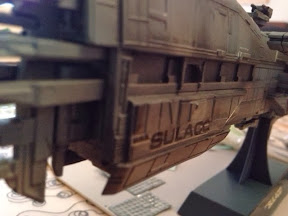 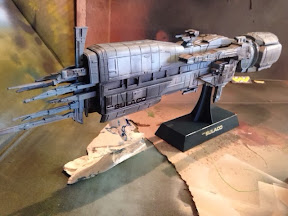 It's a definite 'Monet'. To be enjoyed from 'just enough' distance! Don't get too close! 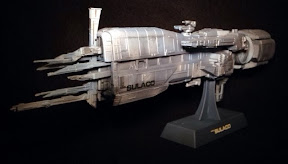 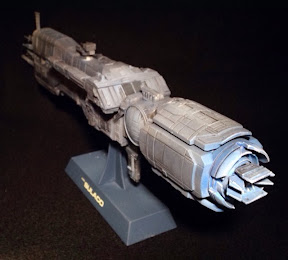 You can see from the bottom photo, that the MicroSet and MicroSol worked a treat. The decal has no carrier film silvering, so I'm happy about that, at least.