Nice to see that Jon's carnival of bloggers is battling on regardless. It's a great team, with varied insights across myriad aspects of a hobby with such a massive scope. 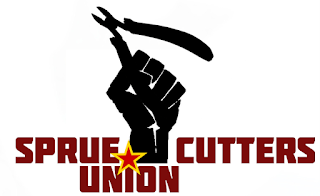 This month, we're revisiting an old topic - The Stash: Why so many kits?

To be honest, looking at my Twitter colleagues across the world, my stash is poor. I only have 20-40 'ordinary' kits at most (maybe a load more in the way of Warhammer minis, but they're obviously separate, conceptually), and about 5 on the go at once. My wife doesn't get why I have 'so many' that I haven't built, or even that I have some that I won't ever build (and yet she occasionally buys me a new kit for the pile!)


If anyone reading this knows the work of Brad Hair (Twitter user @bhp99), you may know he has recently been posting regular weekend photos of a multi-trip move from a rented lockup to a new shed he's built in his yard. Literally thousands of boxes of plastic have been transported in the back of his pickup truck. Brad is a much more prolific builder and painter than me - he seems to have the commission thing sewn up - and I reckon he'll get through a bigger percentage of his giant stash that I ever will of mine.


There are a few kits I have in my pile that I have for sentimental reasons. The ERTL/AMT Batmobile from the 1989 Tim Burton movie is a clear winner - I picked my first one up with I was 12ish in Lancaster (The Rocking Horse toyshop), while on my way to a family trip to Plymouth to see my Nan. It cost a fiver (50% off at the time - win!). I remember dry-assembling it in my Nan's spare room, where I had a foldaway bed. I now have 2, and a couple of the send-away vaccu-formed cocoon shields. I'll definitely build one, but keep the other in the box. Just opening the box brings back memories of the smell of that room, and the excitement and anticipation of building it 'properly'.


The Halcyon Movie Classics Kits, for anyone who's ever read this blog, have massive nostalgia for me. As a teen, I hankered after all of the Alien sets - I wasn't allowed to buy them, or they were too expensive - but I did get the Back To The Future Delorean when I was 15. I built that as the flying Mr Fusion version at the end of the first film. And now I have 3 or 4 more. And a few 'too many' Aliens kits. I will always be tempted by mid-90s Halcyon kits. Thanks, eBay...

The Warhammer stash is, as I mentioned, an entirely different thing. It's a mild obsession, based on my habit of collecting things and needing to complete collections (see here for a cataloguing project for an 'investment' habit I managed to kick years ago). I don't play the game any more- I nearly got the wife into Lord of the Rings, but that was a non-starter. My stepson quit playing a few years ago, to pursue more interesting things like video games and girls. Fair enough, but who will I skirmish with now? More to the point, I'm stuck with armies and armies of part-started, and still-sealed models that are worth only a fraction of what I paid for them. Of course, they might pull in more money once they're all painted to decent standard, so I should keep them for that purpose.


Excuses, eh? We all use them. Maybe it's easier to find BS excuses for our obsessions than to delve into 'real' self-analysis.

Boiled down, I think these things all represent bits of me: my past; my future. Things that a 'Kodak moment' can't always express.


BTW, if anyone want to come over and help me tidy my garage, I won't mind.