Quick, middle of the night update about paints and Space Hulk

It's nearly 1am, and I've just finished dying repeatedly in Alien: Isolation.  Mikey's taken over the Playstation for some Battlefied, and as I'm typing I can feel my old RSI flaring up. Quickly then.

Today was interesting - I pulled the compressor and airbrush out of the garage to give my new Vallejo Game Air set a whiz. It was my birthday last week, and apart from being given the scary Alien game, I received a complete set of VGA paints and a copy of Space Hulk. 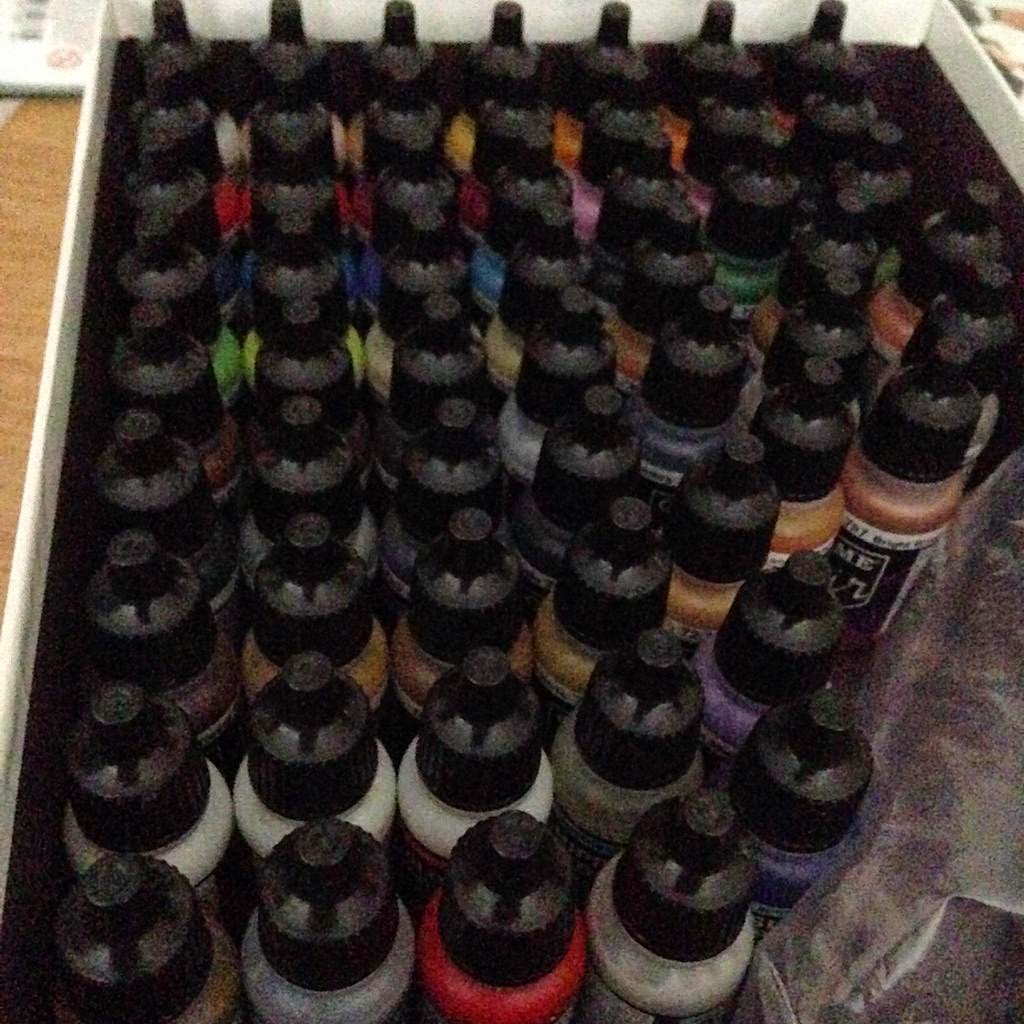 It's taken me most of the week's evenings to clip, file, sand and glue the plastic game pieces together - 12 Terminators, a dead Termie on a throne, 23 Genestealers, a robot drone (C.A.T.) and a chalice of some kind. I haven't read the rules yet. 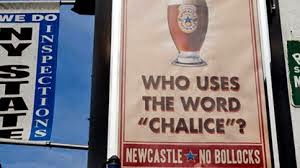 A couple of things:

1. Space Hulk is a very heavy boxed game. It's almost a 2-man lift.
2. The plastics in Space Hulk feel more 'consumer' than 40k - a bit 'Christmas Cracker Quality'
3. The 'complete' set of Vallejo Game Air is from Element Games - a good price, but they don't offer these in the bundle: White Primer, Black Primer, Grey Primer, Airbrush thinner. What you do get is all the new VGA paints, a chipping medium, gloss, satin and matte varnishes, and 5 coloured primers: red, blue, silver, brown & bone.
4. I recently dropped my H&S airbrush, bending the 0.4mm needle, so I'm spraying using the 0.15mm, which isn't really designed for base-coating. 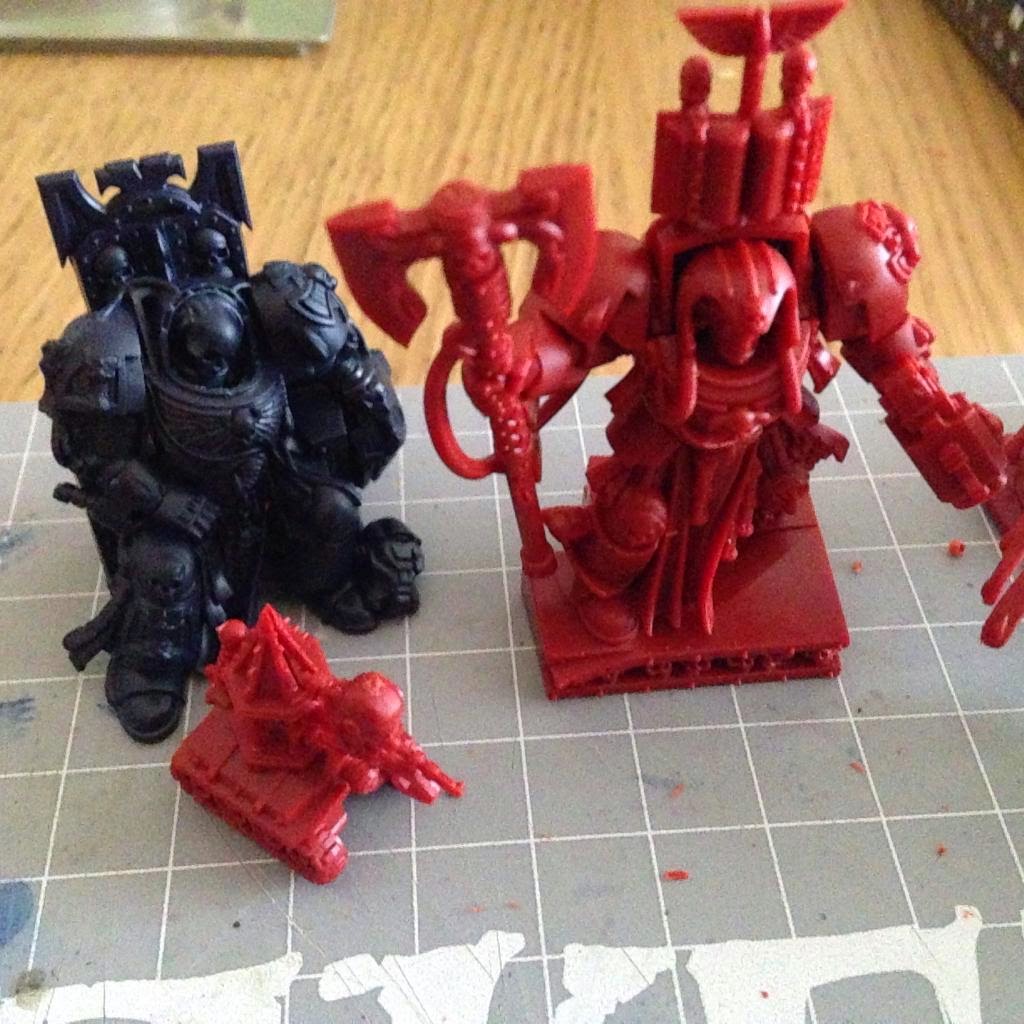 I started with the Genestealers. Approximately 3:1 ratio paint to thinner, mixed in the cup, and compressor set to 1 bar (c.15psi). A few thin layers - perhaps the blue primer was too thin, but as long as it's going through the tip without drying, and it's not running when it hits the mini, I'm okay with multiple layers. I think I'd get away with a 2:1 through the 0.4 needle, but I'll find out when I order a replacement.

Next, the Terminators - 11 red, and a librarian - so, blue again - but first to try the brown primer for preshading, and to get a different colour contrast on the minis before finishing with red primer. Same ratio, ish, as the blue, and it went on fine.

Lastly, the floor tiles, cup-thing and CAT robot. Priming in silver, no less. This is a new thing for me - metallic primer. Usually, I'd prime grey to get a good footing, then a layer of gloss black and then the silver. I mixed the primer at a more 4:1 ratio - truthfully, I was a bit squirt-happy with the thinner, but the pigment held together fine in the cup, and, although it went on a bit wet and thin, it dried fast enough and gave decent coverage after about 4 coats. 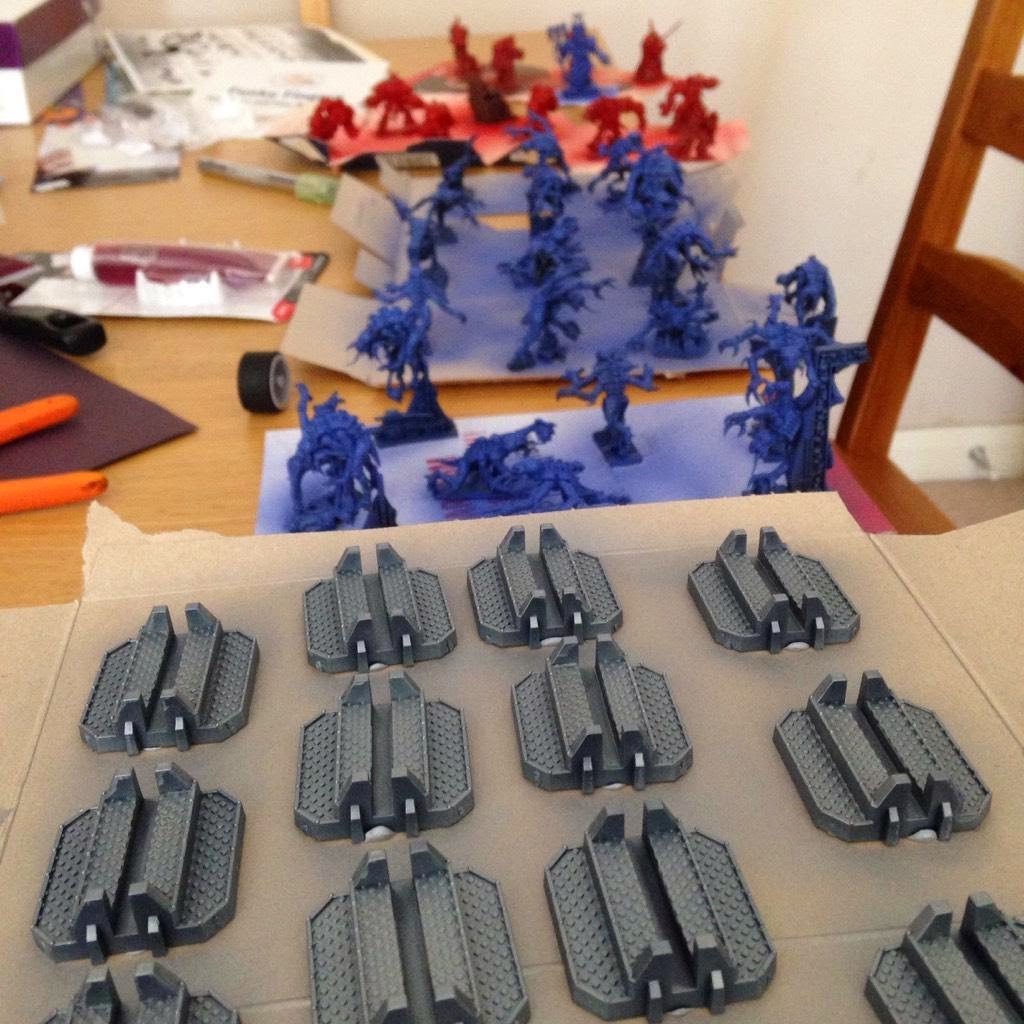 I let them cure in the air for a couple of hours before packing away and getting on with Hallowe'en with the kids. So far, so good. I'll see how they take washes and other layers soon.