I've discovered recently that time is, in fact, fleeting; family comes first; and that sleep isn't best achieved on the bus to work. End result? I haven't painted much recently.

Anyone reading this might also notice that it's been a while since my last post, and other than some Twitter presence, I've been quite quiet. Blogging, it seems, requires a similar commitment to painting.

That said, Games Day is coming up, and Mikey and I both have figures to finish for Golden Demon. He's planning on entering a damned legionnaire as a Youngblood, and I have plans that far exceed the realities of possibility and practicality. 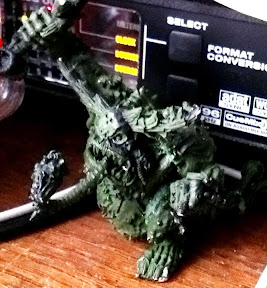 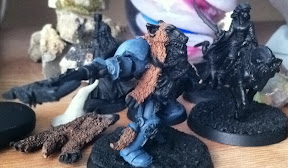 So how have I managed to keep my hobby alive this summer, while not really achieving anything of note?

Collecting, lurking, and mindlessly assembling. That's how. Let me elaborate...

Collecting: Also the subject of a future post - showing that the mind of a modeller/gamer is perhaps not as normal as we'd like to persuade ourselves that it is. Collecting minis is something we all do. Shelves of unfinished projects will attest to this. I read an editorial in Finescale magazine a few months ago which made a similar point - even if he didn't buy any more kits, the editor reckoned it would take several lifetimes to complete what he already had (and he wasn't about to stop buying new stuff).

So I've been picking up bargains, must-haves, tools, paints and magazines, all making me feel like I'm doing something towards completing a project. I just grabbed an old edition of LOTR warg attack minis from Time & Space in Broadstairs - down from £35 to just over 20 quid. I could have bid on eBay and got it cheaper (maybe) but it's a good bargain, and it supports local stores other than GW. 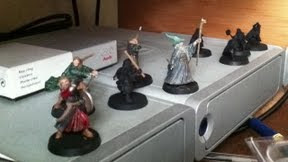 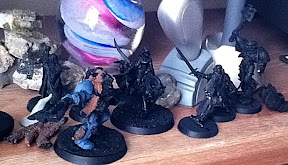 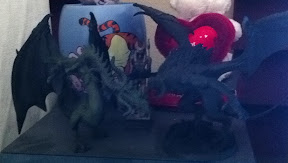 I have a pile of minis on my desk (not to mention what's hiding in the garage) that are ready to paint. Some are ready to assemble. Others are ready to open...

Lurking: like you (i'm sure) I spend more time than I should reading blogs, tips and tutorials on sites like BoW, DakkaDakka and even GW itself. I don't often, if ever, post on these sites, but they're a fantastic resource, which I'll contribute to one day.

Mindlessly Assembling: while I check my email or fix my wireless network of an evening, I might grab a scrap of paper to work on, get a pair of clippers and a file, and multitask. It's amazing what you can achieve when you're not looking.

By Monday morning, I had assembled and filled the Warg set I bought on Saturday. I hadn't set any time aside for this, and I bet my wife would say I could have been doing something else instead, but basing, priming and putting them in the WIP queue is all that's next. 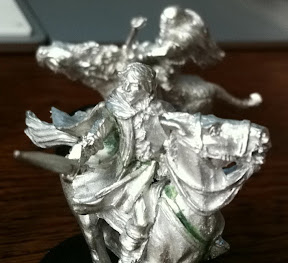